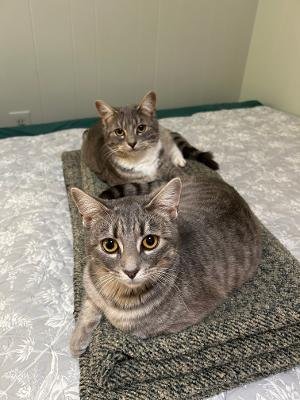 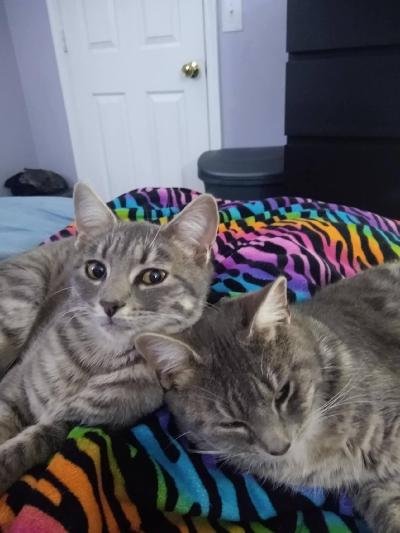 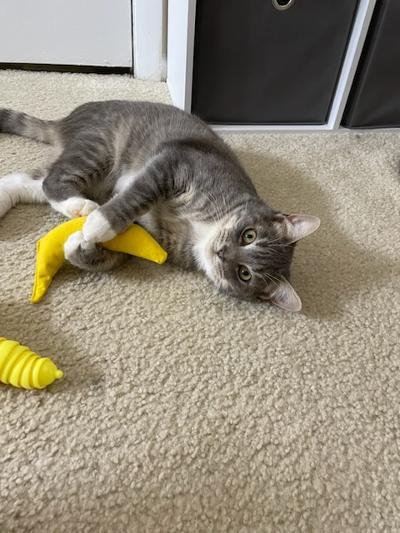 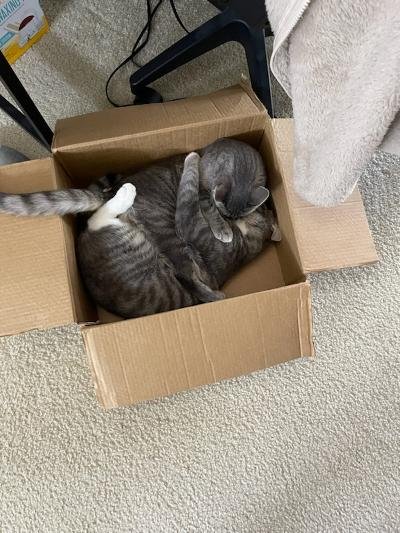 Gus and Willow are best friends and probably siblings. They love playing with each other and aren’t shy when introduced to new people or new places. They make themselves right at home! These growing kitties love to eat and get very vocal when they see their food. They are a bonded pair who need to be adopted together.

GUS (grey/white tabby/tuxedo) is a very sweet, friendly kitty. He's a big boy and still growing. Gus loves head scratches behind his ears and snuggling up in your lap for petting. Gus may seem “lazy” at times, but don’t let that fool you! When he is in play mode, he pounces at anything in sight, including Willow to start "play fighting." When he’s not playing, Gus likes to nap in a cat tree by a window, or in your lap if given the opportunity. When he hears you stirring in the morning, he jumps into your bed for snuggles.

WILLOW (grey tabby) is an adorable explorer. She's much smaller than her brother. But this doesn't stop her from initiating play with him. Willow is much more active than Gus and enjoys roaming, exploring, climbing and jumping. She is very friendly and likes being petted, but is more independent than Gus. She does, however, like to curl up next to you on the couch or sleep in your bed at night. Her favorite toy is a string toy dangling in front of her.

What Type of Home They Need

Gus and Willow need a moderately active to active home where they will get plenty of interaction with their human family and have room to explore. They need a home with at least two people and a family with kids would be ideal. We have not seen them interact with other cats or dogs, but given their easy-going demeanors they would probably do fine with either. Nothing fazes these kitties!

Where They Came From

Gus and Willow were found outdoors at a camping/cabin site by a kind man (with 4 cats of his own). He spotted them looking for food and soon realized they were friendly kitties who craved human affection. They camped with him for a few days, even sleeping in his tent. When it was time to go home, he packed the kitties up and brought them home to work on finding them a forever home of their own.